Ascent™ Fixed Safety Ladder - with or without hoops

Ascent Safety ladders designed to BS 4211 and CE manufactured in accordance with BS EN 1090-1 procedures and provide safe access between levels in and about buildings. It is noted in BS 4211 that A companionway ladder / ships ladder - inclined at between 60-75 deg and incorporating treads rather than rungs is generally safer and easier to use than a vertical ladder.
Safety Fabrications have developed the both Ascent Companionway / Ships Ladders and the Ascent Vertical ladder range to incorporate a number of Safety options. The Ascent fixed vertical ladders can be provided with either hoops / a cage for fall protection or they can be fitted with either a vertical ladder based Safety line or Ladder Safety track / rail. The ladders can be supplied with a self-closing gate, a ladder up post, a hatch or anticlimb safety solution. 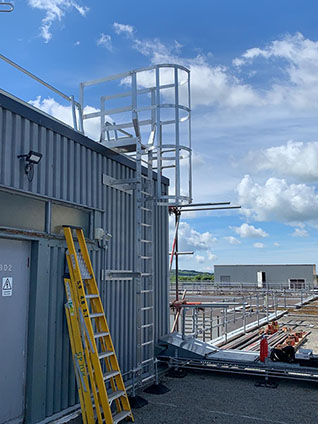 When specifying an Ascent Vertical Fixed Safety Ladder consideration must be given to all aspects of end user safety. Falling down the ladder is the obvious hazard. This can be protected by ladder safety hoops/ cages and proprietary vertical safety systems - either cable or rail. A secondary and often overlooked hazard is the fall hazard the user is exposed to as he first climbs the ladder, in particular where the ladder is located adjacent a roof edge, fragile surface or stairwell. The Safety of the end user can be vastly improved with the introduction of half hoops at the base of the ladder, protecting the user from the adjacent fall hazard. An additional Safety feature incorporated within the Ascent ladders is the self closing gate which is typically located at the head of the ladder. This forms a physical barrier at the head of the ladder and minimises the potential fall risk from the ladder.
A number of additional Safety features that further enhance user safety that can be incorporated into the Ascent ladders design include:
1. The ladder up post which is typically used at the head of a ladder to hatch to aid users safe passage both up onto and down from an upper roof.
2. The Anti-climb ladderguard & Bottom hoop cover - both of which can be used to restrict un-wanted entry to the ladder.