The UK Green Building Council – What’s it all About?

The UK Green Building Council – What’s it all About? 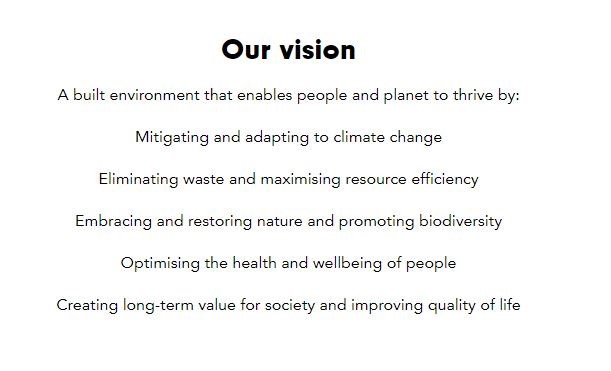 The UKGBC is a membership organisation that was launched in 2007 with the purpose of radically transforming the way that the built environment here in the UK is planned, designed, constructed, maintained and operated.  You can see the vision statement of the UKGBC in the image alongside this article.

The organisation was formed in response to the 2004 Sustainable Building Task Group Report Better Buildings – Better Lives, which recommended that the UK government should “review the advisory bodies concerned with sustainable buildings to simplify and consolidate them and to provide clear direction to the industry”.  The UKGBC is, through the World Green Building Council, part of a global network of like-minded organisations in almost 80 countries.   The key issues that the UKGBC work on deal with the material environmental and social impacts of the built environment, and include:

The UKGBC aspires to making sustainable development second nature and its ten year plan, “Ambitions for 2027” is the roadmap they use to make that happen.  It demonstrates how the organisation plans to measure both their own, and the wider sector’s progress towards that aim.

The ten year plan compromises a Model for Change which highlights the four levels at which change can be influenced, which are:

The UKGBC publishes an annual Impact Report to capture the overall scale of their activities and the changes that have occurred in the above four levels.

The built environment is vital to our economy and determines how we lead our lives.  However, at present the built environment consumes resources at an alarming rate and is responsible for some of the most serious of both global and local climate change.

With the regeneration of city centres and post-industrial land currently taking place, this is an ideal time to make changes and reform the ways in which we build whilst delivering more housing and improving residential neighbourhoods around the UK.

As we demolish or refurbish the failing buildings left from the sixties building boom, we must learn from the past so that similar mistakes are not made in the future.  Research over recent years has given us new knowledge about the environmental constraints and pressures that go hand in hand with development.

We currently have too many environmentally inefficient buildings (both old and new) here in the UK which overuse resources such as energy and water.  At the same time we’re experiencing a sharp increase in the number of single person households which, when combined with the increase in domestic waste and a rise in water consumption per person, need to be more environmentally efficient to limit the current impact of existing buildings.

When you add to this equation the climate change we’re experiencing, which increases both the risk of flooding and coastal erosion, we need to plan our built environment to withstand these pressures and limit any additional impact.