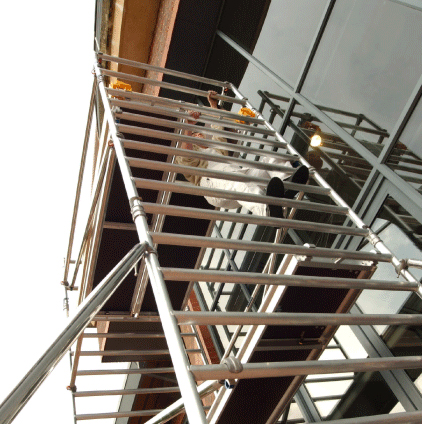 downturn during recent years has led to a dearth in UK suppliers of used scaffolding which has led to contractors turning to alternative sources in order to meet a rise in demand.  Used scaffolding is being imported from overseas and when the equipment is shot blasted (a process during which a high speed stream of steel particles is blasted at the metal surface in order to clean it), it is being discovered that much of this equipment is severely corroded.  This corrosion means that the metal used in the scaffolding is weak and in danger of collapsing, making it totally unsafe for use.

The worst problems have caused an increase in failures of spigot type scaffolding with the area where the spigot comes out from the standard 4mm tube dangerously corroded.

Several companies in the UK offer a reconditioning service for scaffolding equipment and there is a wide range of second hand scaffolding equipment available here in the UK.  While some second hand scaffolding may be a cost effective means of gathering together the specialist equipment needed by a construction company, buying from the wrong source can lead to a breach of the health and safety at work regulations here in the UK.  In some of the worst instances, construction workers are using access equipment that is not fit for use and that poses a real risk of accident and injury.

This was highlighted recently in the case of a Lincoln builder who received a four month suspended prison sentence after a self employed brick layer broke his back in two places after falling three metres from faulty scaffolding.

The 70 year old brickie was paralysed from the waist down and will need to use a wheelchair for the rest of his life following the tragic accident.  He spent five months in hospital and has had to have his home completely adapted so that he can live exclusively on the ground floor.

The builder, Mr. Foyster had been hired to fix a warehouse wall that was damaged after a lorry reversed into it.  He bought and erected second hand scaffolding (despite not being trained to build scaffolding) with scaffolding towers positioned on both the inside and the outside of the warehouse.  Wooden boards were then removed from the tower on the inside of the building and used to form a makeshift bridge between the two towers to provide access.

The bricklayer, Robert Wilkin, was hired to carry out the bricklaying work involved in the repair to the building.  When Mr. Wilkin climbed the scaffolding on the inside of the building he fell from the wooden boards being used as a bridge onto a concrete floor three metres below.

While second hand scaffolding may represent a great investment for a small construction or building company, making sure that the equipment has been reconditioned to ensure that it is safe to use is essential to avoid such tragedies in the future.