While we’re usually providing you with relevant information on ladders, how to buy them, how to use them safely, the rules and regulations surrounding ladders, today we thought we’d take a light hearted look at record breaking ladders. 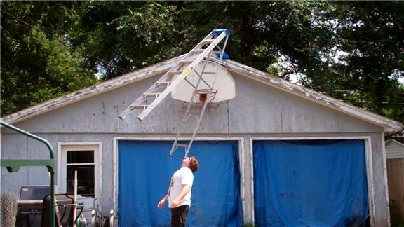 There are plenty of other world records involving ladders, some of which are more bizarre than others!  There is the “longest time balancing an 8ft ladder on the chin” – the record was set by Brian Pankey, who lasted 2 minutes, 13.72 seconds.  Brian also holds the record for balancing an 8ft ladder on just one of its legs on his chin – whether Brian has a life outside of balancing ladders on his chin is pretty doubtful.  Putting Mr. Pankey to shame is Bronkar Lee who holds the record for performing seven-ball force bounces while standing on a ladder and beatboxing.

Next comes the entertainments section of world record breakers who involve ladders in their acts.  Emil Faltynek holds the record for the most clubs juggled while balancing on an unsupported ladder – this is one that’s sure to cause a commotion amongst health and safety executives – an unsupported ladder, whatever next?  The fastest violin rendition of “The Star Spangled Banner” while balancing a ladder on his chin is Chad Lunders – what is it with balancing ladders on the chin, we wonder.

Staying with the chins, the record for balancing 24 eggs on the chin while sitting in a chair on top of a six foot ladder is held by Dough McManaman who managed only 14.85 seconds (and then went off to make an omelette).  In the upcycling category, Doug holds the record for the fastest time taken to transform a ladder into a chair – this was 9.53 seconds which is quite an accomplishment.

The longest ever song title is held by British rock band, the Faces – it’s a track on their Snakes and Ladders album titled “You Can Make Me Dance, Sing or Anything (Even Take the Dog for a Walk, Mend a Fuse, Fold Away the Ironing Board, or Any Other Domestic Shortcomings)”.

If you’re of a seafaring nature you may have heard about a US Coast Guard ladder that’s available.  The debarkation ladder is a massive 320 foot long and is used to disembark from ships in distress.  It’s a rope ladder manufactured by US company, Coast Marine & Industrial Supply Inc which rolls up into a giant spiral and has to be moved with a crane.