Acrophobia (from the Greek akron, meaning edge or summit and phobos, meaning fear) is an irrational or extreme fear of heights.  It is in a category of specific phobias, called space and motion discomfort that share similar treatment options.  While most people have a natural fear of heights (especially when there is no discernible protection), acrophobia sufferers may experience panic attacks in high places and become too distressed to get themselves down safely.  A fear of heights is sometimes called “vertigo”, but this is not accurate as vertigo is used to describe the spinning sensation that can be triggered by looking down from a height, but also by looking straight up at tall buildings or objects.  Vertigo can be triggered by any sort of movement (such as standing up, sitting down, walking, etc) or a change in visual perspective (such as squatting, walking up and down stairs or looking out of the window of a moving vehicle).

Alex Ross, an undergraduate student from Nottingham Trent University, has redesigned the domestic ladder to make it feel safer and help people conquer their fear of heights.  The 21 year old claims to have had a few close calls himself while using ladders and was determined to design a product that people will be able to use with increased confidence.  With research revealing that one in ten people suffer a fear of heights, this could be an important development, especially for householders who find it difficult to use ladders. 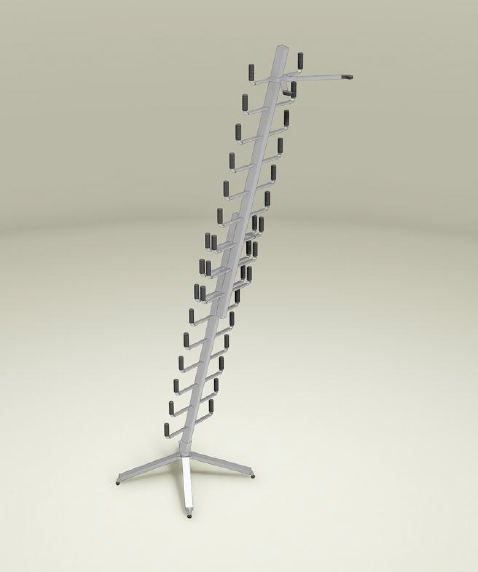 Although there are plenty of rules and regulations on using ladders for access within industry, domestic ladder use is not covered by these health and safety guidelines and many of us do not use ladders in a safe manner.

Alex who originally hails from Edgware in London is studying product design at Nottingham’s School of Architecture, Design and the Built Environment.  He has designed what he claims is a “safe and viable product that will help people climb ladders at home more securely”.  This has resulted in an extremely safe ladder that has everything needed for stability.

The Climb Safe is a single stringer with a spider base and can only be erected at the safest angle.  It’s made from aluminium so it’s extremely lightweight.  The Climb Safe is connected to the base by a joint which ensures that the ladder rests at an angle of 75˚ every time it is used.  The spider style base has four legs (no, not eight) which stretch in opposite directions which reduces the risk of the ladder toppling and the foot of each of these legs is made from non-slip moulded polyurethane.  The ladder’s rungs are finished in a non-slip coating and can be fitted with end caps for extra safety.  There is a removable standoff at the top of the ladder which helps to spread the weight and improve grip.

The Climb Safe debuted at the University’s Art and Design Degree Shows Festival last month and is likely to be a hit with householders who are scared of heights.

Case Studies: Clarendon House (BSG) and Carnegie Library
The Importance of CE Marking Fabricated Items
How to Choose the Right Step Unit for your Business
CE Accredited Fabrications – Useful Info for Manufacturers, Importers and Distributors
Everything You Need to Know about Improving Workplace Indoor Air Quality