In March of this year we published a fascinating article on the world’s tallest building to date following a trip to Dubai by one of our team members.  We found the article so interesting that we’ve decided to look for some more tall or unusual buildings to entertain our readers and include on our blogroll some regular Innovation Station articles.  We’ve already taken a look at the proposed Big Bend building and today we’re heading back to Dubai to report on a truly innovative building, the 0-14. 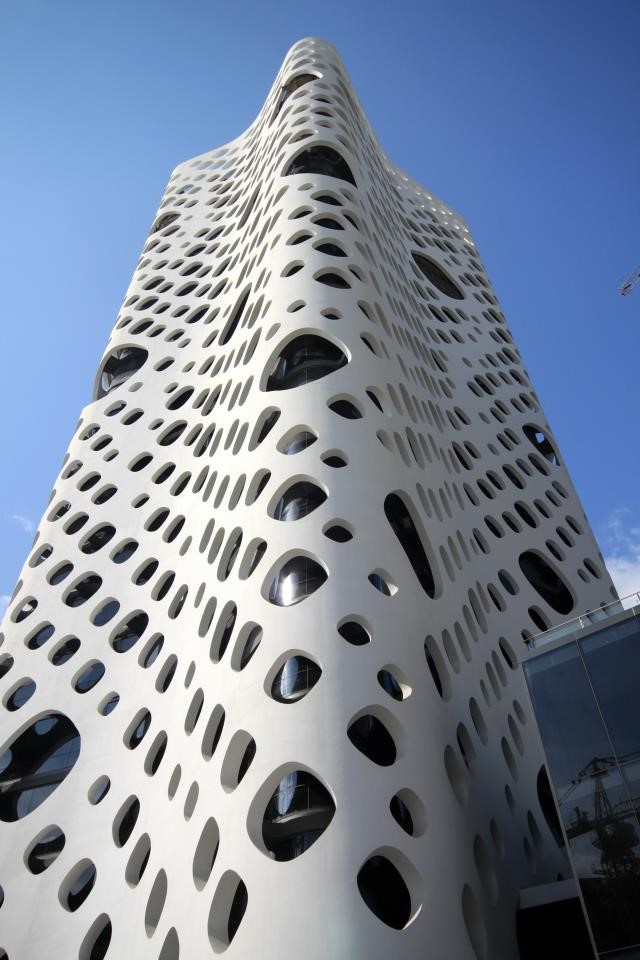 The 0-14 is a skyscraper full of offices located in Business Bay, a centralised business district being developed in Dubai which will eventually contain 240 buildings made up of both commercial and residential developments.  The 0-14 is 102 metres (335 ft.) tall and boasts 23 floors and is the winner of the 2009 Silver Emporis Skyscraper Award.  One of the most innovative features of this building is the 2 metre space between the façade and the windows which enables hot air to rise, promoting cool air to entre from below, basically a self-cooling building.  The 40cm thick façade is constructed from an extremely fluid type of concrete and has more than a thousand circular piercings of various sizes.  The building as a whole is supported by the core and the exoskeleton so that the interior space is relatively free of structural columns.

The building was conceived and designed by RUR Architecture, an internationally-recognised multidisciplinary design company which builds projects in a range of scales from furniture, through residential and commercial structures, up to infrastructure and urban design. 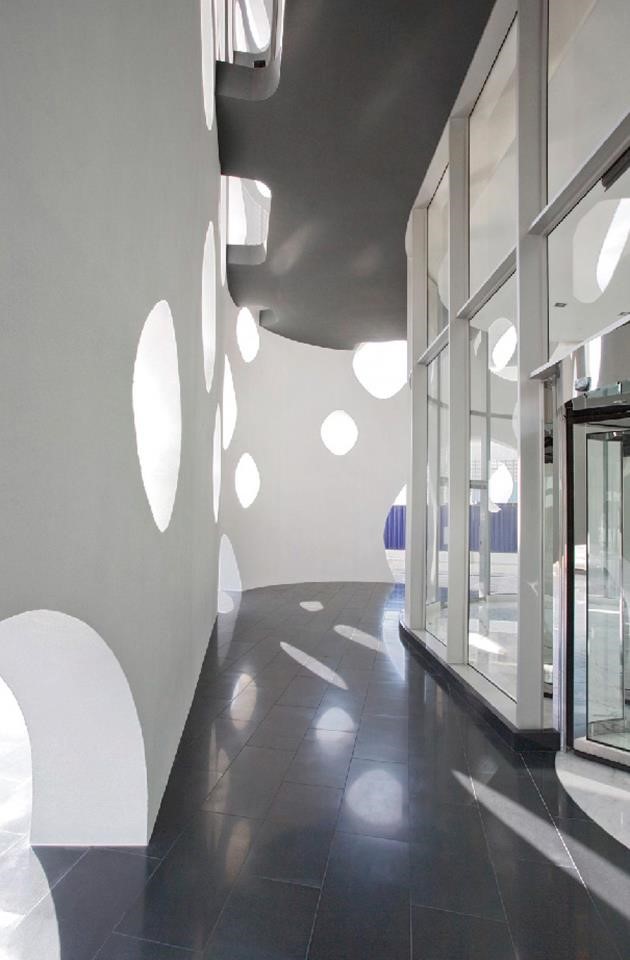 The perforations in the façade of the 0-14 building act as a solar screen which lets in light and air and allows the occupants to view the landscape outside the building.  The one metre space between the façade and the building’s glass surfaces causes hot air to rise in pretty much the same way as a chimney would which acts as a passive cooling system for the  interior of the building.

The rounded perforations in the exoskeleton have resulted in the 0-14 being nicknamed the Cheese Building because from a distance it looks like a giant block of Swiss cheese with rounded edges.  Although the holes in the exoskeleton appear to be randomly spaced, there are clear diagonal paths of solid structure where the steel rebar is concentrated in order to provide structural integrity and strength.  According to the structural engineer Ysrael Seinuk, the curved shape of the shell provides a strong and efficient structure that could have been built much higher but it does mean that the rebar used had to be curved to follow the shape of the building’s façade.

We’ll be on the lookout for more interesting and innovative buildings for our Innovation Station series and if you know of any that you’d like us to cover, please let us know by getting in touch on our Facebook Page or Twitter profile.