The Immovable Ladder - What's it all about?

The Immovable Ladder - What's it all about?

Every now and again, while we’re researching the wider world of ladders we come across an interesting ladder story that’s not particularly relevant to our industry but that we think our readers will find fascinating.  The Immovable Ladder is one such tale – the Immovable Ladder is at the Church of the Holy Sepulchre in Jerusalem.  It’s propped against the wall on the façade, underneath the window of the Church of the Holy Sepulchre in the Old city of Jerusalem.

The ladder was first recorded in eighteenth century and has been in this exact location ever since then.  The cedar wood ladder was placed there by a mason who was carrying out some restoration work in the Holy Sepulchre and features in an engraving dated back to 1728. 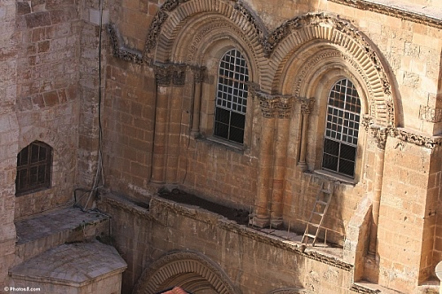 The earliest actual photo of the ladder dates from the 1850’s but it’s mentioned in an edict by the Ottoman Sultan Abdul Hamid I in 1757.

The Ladder has come to represent some of the key differences that divide the Catholic Church and the Orthodox Church.  There is an understanding that no cleric of any of the six ecumenical Christian orders is allowed to rearrange, move or alter any of the Holy Sepulchre’s property without consent of the remaining five orders.  This is the agreement of Status Quo which defines the six Christian religious orders which claim rights over the Church of the Holy Sepulchre.

The Immovable Ladder has long symbolised the discord within the Christian Church and Pope Paul referred to it as a “visible symbol of Christian division”.  The Primary custodians of the Church of the Holy Sepulchre are:

The latter three denominations have lesser duties than the former three.  The whole of the Church is carefully divided into sections, some of which are common ground and some of which are exclusive to a particular sect.  There is intricate set of rules determining other groups’ rites of passage through each particular section, especially on Holy Days.  Discord seems to reign and this sometimes even leads to violence!

A small section of the roof of the Church is being disputed by the Copts and the Ethiopians and at all times a Coptic monk sits on a chair placed on a particular spot to enforce the Copt claim.  On a hot summer day in 2008, he moved the chair 20cm into the shade in order to relieve his discomfort in the heat.  Violence erupted with the result that eleven monks were hospitalised.

These problems make it difficult for an agreement to be reached on any repairs and renovation work on the Church and it is falling into a state of decay as a result of this sorry state of affairs.

The Immovable Ladder remains a telling reminder of the need to cooperate in the workplace, whether the workplace is a Church, a shop, a factory or a building site.  Cooperation and collaboration is the only way to make progress.