Last week we took a look at “bottle-bricks” – one of the latest crazes with innovative DIY-ers who are determined to bring the beauty of stained glass into their homes and gardens without having to hire an expensive stained glass artist.  It’s also a great method of recycling empty glass bottles, keeping them out of landfill and repurposing them in order to add decorative highlights to their homes in an eco-friendly way.  They look good and they’re good for the environment too.  Instructions and how-tos abound on the internet as people share their creativity with others, with loads of YouTube videos on how to build “bottle walls” and “bottle windows” using several different methods in order to achieve a range of looks and styles.  While researching how to build bottle walls and how to make bottle bricks, we discovered that these contemporary bottle wall builders aren’t exactly going boldly where no man has gone before (bow to Star Trek) – it seems that Heineken got there first as far back as 1960 with the WOBO!

If you’re feeling confused and may think that the WOBO is some sort of spaceship, you couldn’t be 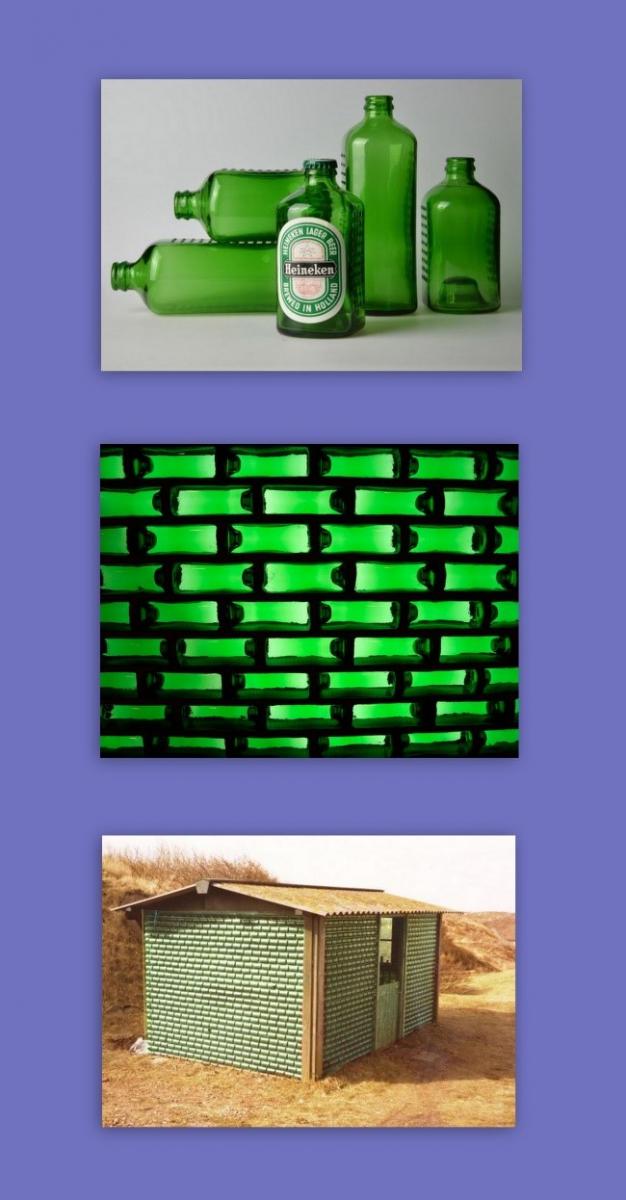 further from the truth.  On a world tour of Heineken factories in 1960, Alfred Heineken had a sudden flash of inspiration when he saw piles of bottles littering a beach on the island of Curacao which had no facilities for returning empty bottles for reuse (back in the days when you would get the deposit, a small sum, returned to you when you handed the bottles back in at a shop).  Curacao also suffered from a lack of affordable building materials so Alfred got in touch with Dutch architect N. John Habraken and asked him to design “a brick that holds beer”.  Thus the WOBO (world bottle) was born.

The rectangular bottles were designed to interlock so that they could be laid horizontally and were produced in two different sizes, 350 mm and 500 mm (in order to provide the necessary half-bricks for building).  The square bottles featured dimpled sides to key to the cement mortar which needed a silicon additive.  A 10ft by 10ft hut would need about 1,000 bottles to complete (and you’d need to recover from the hangover before commencing the project). There are only two surviving structures built with WOBO bottles, a small shed and a double garage which was renovated with a WOBO siding.  Take a look at the video explaining the process in detail:

Sadly, the concept wasn’t developed further and the idea didn’t get a chance to really materialise and make a difference.  However, it comforting to know that Alfred Heineken had the vision to realise the damage waste is doing to our planet and attempt to put it to good use.  We’re pretty sure that should a similar initiative be launched today, with the awareness we now have for environmental issues, it would be a resounding success.

It seems that there are large, global corporations that have an ingrained culture of environmental awareness and the need to protect our environment – and here at Safety Fabrications, we salute Alfred Heineken for the progressive and caring attitude he displayed.