While the outcome of Brexit is still pretty uncertain (even more so following the Prime Minister’s unexpected decision last week to call a general election for June of this year), there are many people here in the UK who will welcome the opportunity to loosen our health and safety legislation if Britain leaves the single market.  It seems that there are those who blame European Union legislation for the issue that’s commonly known as “Elf and Safety Gone Mad”.  However, health and safety legislation is rendered pretty impotent without a complex and rigorous enforcement process.  Here in the UK we’ve seen accident statistics slowly decreasing in recent years, thanks to a combination of stringent health and safety legislation and an enforcement process that is the envy of many of our European counterparts.

One of our team members regularly visits family in Crete, Greece and always returns with stories of idiots on ladders that make us shudder!  Despite having the same health and safety regulations and similar building regulations to our own, in Greece there is no real enforcement which is putting construction workers (and the population) in Greece at risk on a regular basis.  Our team member regularly takes photos of some of the building work he sees going on when visiting family and some of these are absolutely shocking.

On a recent trip to Crete there was some building work going on in the street near our colleague’s family’s home so we have some snaps of the scaffolding used on the job.  Here are two photos taken from different directions.

As you can see, there has been no attempt to protect either passers-by or the workers carrying out the job – the scaffold has been erected merely to provide access to the tops of the walls which were being replastered.  Tools were tossed around and a rusty wheelbarrow served as a tool bucket.  When the scaffolding had been dismantled, it was piled in the gateway of a derelict building opposite with several bags of rubble dumped on top.

A ladder was used to finish some parts of the job, which you can see in one of the photos below.  The other photo is of the completed job. 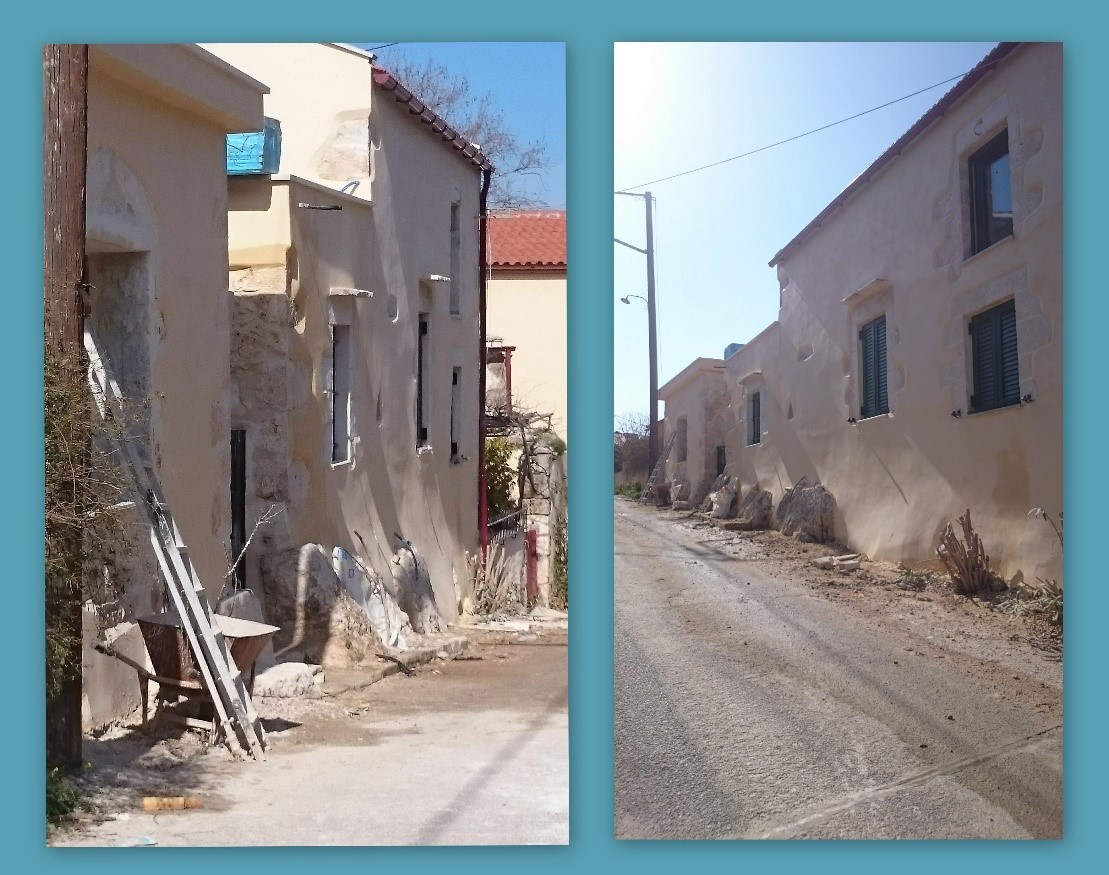 This type of scenario is typical all over Greece where there is no method of enforcement for so many of the European laws that have been designed to protect us.  Despite the fact that motorbikes and scooters are the most common form of transport, it’s unusual to see somebody riding one while wearing a helmet.  A whole family on one motorbike is a common sight in Greece with Dad driving, the smallest child sandwiched between him and the mother who rides pillion while one or two more small children often sit behind the mum.  Our colleague has even seen two builders on their way to work on a motorbike with one facing front and driving the bike while the other faced to the rear, holding onto the handles of a wheelbarrow which was being used as a trailer to carry tools and materials for the job!

So, before we all start hoping that we can relax health and safety regulations here in the UK, we should instead be counting ourselves lucky that we have the right enforcement processes in place that protect us from the types of risks that are commonplace in other countries.