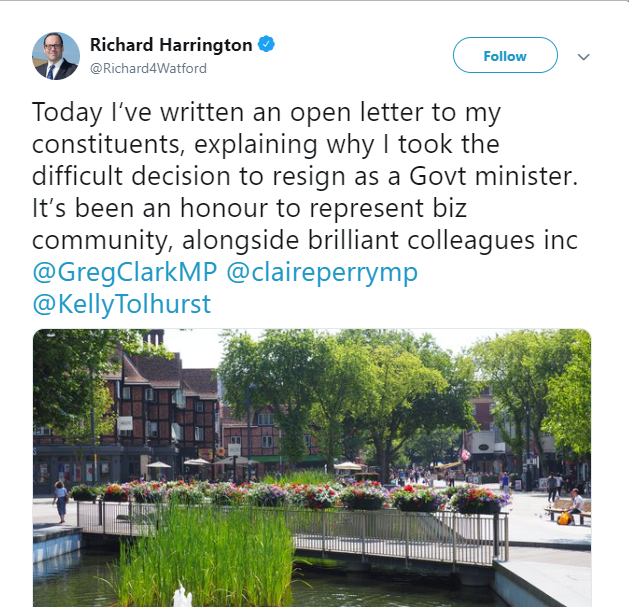 With Brexit temporarily delayed as the UK struggles to negotiate a deal with the European Union, we’re experiencing the fallout from the shambles that Brexit seems to have become.  One of the latest results of this uncertainty and confusion is that the Construction Minister, Richard Harrington resigned last week in order to vote against the government to give MPs control of the Brexit process.

Harrington began his tenure as Construction Ministers in June 2017 following Jesse Norman’s (the pervious Construction Minister) move to the transport department following the last general election.  As seems to be the usual practice nowadays, Harrington tweeted a copy of his resignation letter, saying that according to the business community, failure to reach a deal and rule out hard Brexit is resulting in “cancelled investment decisions, business being placed abroad, and a sense of ridicule for British business across the world”.

Harrington’s resignation is causing concern for the construction industry – after all, industry pundits have been calling for more clarity around the Brexit process for a long time.  As we reported at the end of February, Harrington’s co-chair of the Construction Leadership Council, Andy Mitchell, wrote to Harrington imploring him to “fight for construction” as the deadline for Brexit drew nearer.  Mitchell’s letter came in the wake of a summit of construction leaders meeting to plan how the industry could best cope with a no-deal Brexit.  In his letter, Mitchell claimed that it would be impossible to reduce the potential impacts of a no-deal and that the industry would need to demonstrate a “spirit of cooperation” in order to address future issues as and when they arise.  Mitchell went on to urge Harrington to continue to advocate for the construction sector within government and encourage parliamentary colleagues to show a similar approach when dealing with our sector.

All of which resulted last week in Richard Harrington being joined by Steve Brine (Health Minister) and Alistair Burt (Foreign Office Minister) to step down to vote against the government’s handling of the Brexit process.

According to Harrington, a no-deal Brexit would have far reaching implications for Britain.  The economy could take as long as ten years to adjust to a no-deal, with jobs lost and livelihoods destroyed in the intervening years.  He claimed that leaving the European Union without a deal would result in a “giant economic experiment” supported only by a small minority of professional economists, a minority of Conservative party members and a small percentage of the widespread population.

The Brexit crisis is not yet over and the uncertainty continues, not just for the UK construction industry, but for the whole of the UK.  We’ll be keeping a close watch on the developments so that we can inform our readers as accurately as possible about what this means for the construction industry in the months ahead.