Bottling It Up – Plastic Walls

Bottling It Up – Plastic Walls

Last year we published a series of articles about one of the mainstays of the construction industry – the humble brick, without which the building trade wouldn’t exist.  For those who are interested, we covered the following topics:

·The history of bricks

·Bricks made from blood

·How bricks are made

·How to grow bricks

In recent months we’ve come across some interesting stories about bottle walls – using glass bricks made from bottles which results in a stained glass effect as light filters through the coloured bottles.  We were surprised to learn that Heineken got in on the act a long time ago and experimented with brick shaped bottles in a bid to reduce waste and provide cheap building materials.

Today we’re going to have a look at building walls with another type of bottle – plastic bottles.  In a “two birds, one stone” scenario, people across the world are keeping empty plastic bottles out of landfill and out of our oceans by using them to build walls.

Of course, empty plastic bottles are pretty flimsy, to say the least, so before being used as construction materials they need to be strengthened by filling them with sand.  The compacted sand inside the bottles makes them nearly 20 times stronger than traditional bricks!  The sand also acts to insulate from the heat of the sun, so these plastic bottle bricks are becoming ever more popular in developing nations, especially in hotter countries.  As an added extra, the sand renders the bottles practically bullet proof too, making them a safer option in regions where there is unrest. 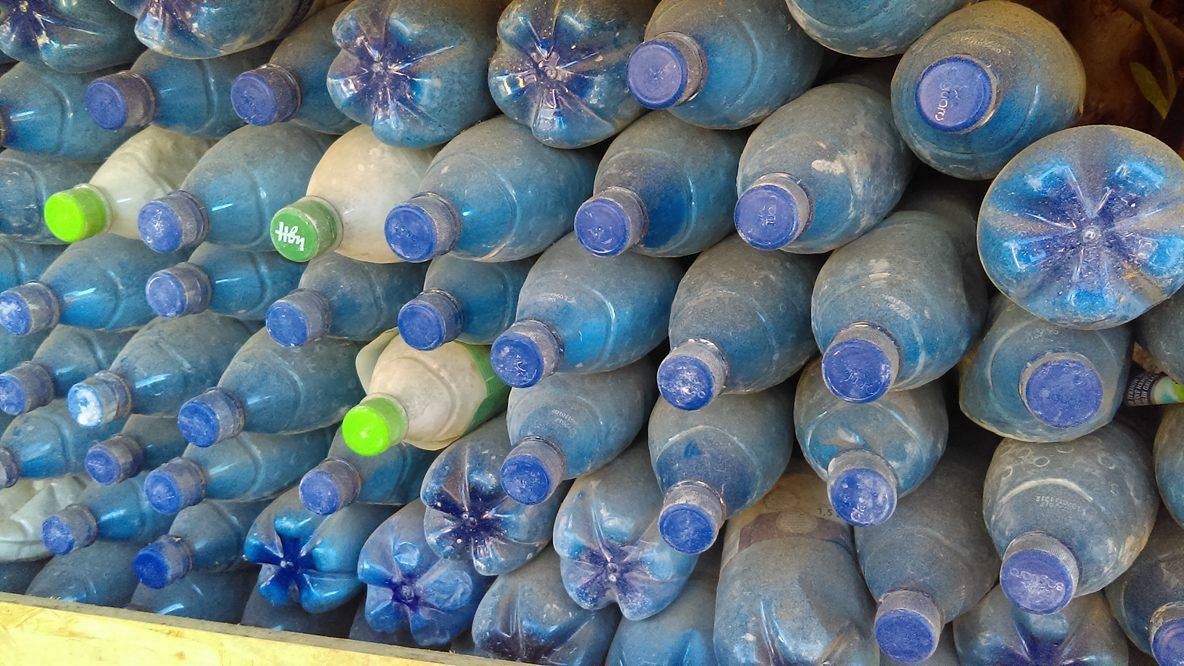 In some countries, the practice of using plastic bottles is having a positive social effect – with a shortage of plastic bottles in some areas, they are being sourced directly from hotels, restaurants and public buildings, decreasing the cost of waste removal and increasing the amount of recycling.  The bottles are often filled with sand by street children who are being paid to do so, demonstrating to them that there are better opportunities in their future.  Indeed, one 15 year old who works on a buildings site reveals “I don’t want to be a beggar, I want to work and get paid – When I grow old I want to build myself a house with bottles”.

Bottle walls are usually constructed on a foundation set into a trench in the earth to increase stability.  Recent initiatives in Africa and South America are promoting the use of “bottle houses”.  In Nigeria alone more than 500 million plastic bottles are discarded every year so repurposing these bottles is great for both the environment and the economy.  It’s a cheap and convenient solution to the housing problem and the unemployed and differently abled are being encouraged to undergo training in the construction methods used.

Ordinary mortar is used to hold the bottles in place and the walls can be decorated to suit the residents.  We quite like the look of the walls in the above video, with a star shaped pattern from leaving the bottoms of the bottles exposed.  However, a quick skim of mortar would result in a smooth surface which could be painted or decorated in a wide range of ways.

Case Studies: Clarendon House (BSG) and Carnegie Library
The Importance of CE Marking Fabricated Items
How to Choose the Right Step Unit for your Business
CE Accredited Fabrications – Useful Info for Manufacturers, Importers and Distributors
Everything You Need to Know about Improving Workplace Indoor Air Quality