Here at Safety Fabrications we are so proud that one of our safe access products, the Ascent™ Walkway system, was chosen for installation on Alder Hey Children’s Hospital to provide safe access to the roof.

Alder Hey Children’s Hospital in Liverpool is one of the UK’s largest children’s hospitals and one of several specialist hospitals in the Liverpool City Region.  It was first opened as a military hospital in 1914 and used by the US Army as a Camp Hospital during the First World War.  The hospital was also used to treat injured military personnel during the Second World War.  When peace resumed, Alder Hey was opened as a neonatal unit to treat sick babies and, when Myrtle Street Children’s Hospital closed its doors in 1990, Alder Hey absorbed its A&E Department.

In 2013, work began to redevelop Alder Hey, demolishing the old buildings and reclaiming the surrounding land, with the new hospital opening its doors in 2015 as Europe’s first children’s hospital built in a park.

Alder Hey is now venerated as a centre of excellence for Oncology and Muscular Dystrophy, as well as spinal, heart and brain conditions.  Alder Hey conducts paediatric research into children’s medicines, infection, inflammation and oncology and is within the NHS National Institute for Health Research’s Top 100 Performing Trusts. 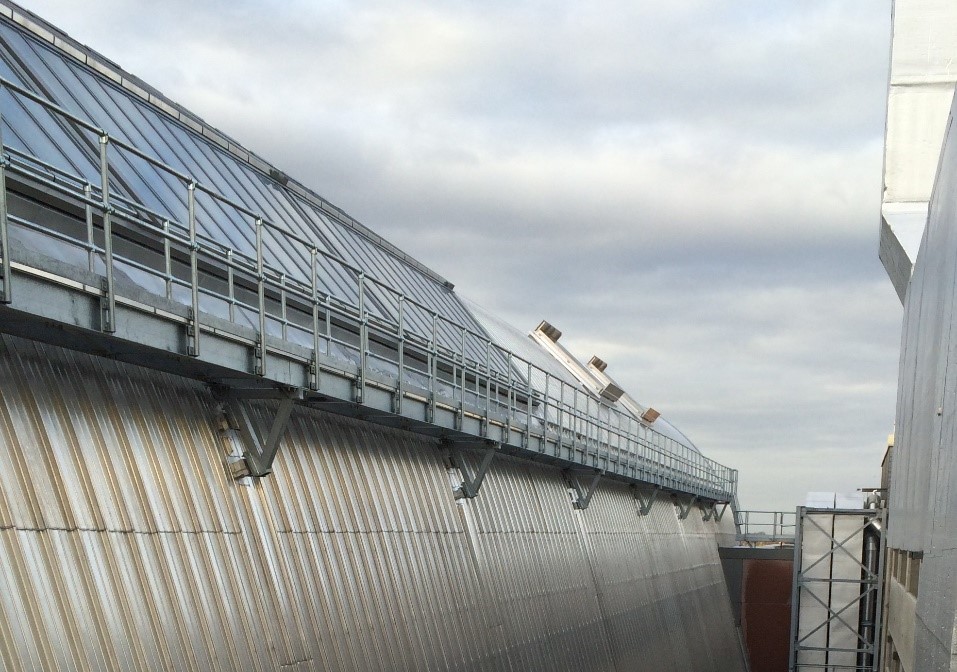 Alder Hey was built with children in mind and, indeed, children and youngsters were involved in consultation on the design of the new building – which aimed to provide a functional space with access to fresh air and nature.  Now nicknamed the Hospital under the Hill, Alder Hey blends in with the surrounding parkland thanks to the living grass roof which features grass in the park curving upwards to blanket the roof of the building.

Of course, this roof needs to be regularly maintained, not only to keep the grass green, but also to carry out general inspection and maintenance tasks.  The design of the building presents a difficult challenge when it comes to access to install safe access systems and Work at Height Regulations (WAHR) requires that competent and trained workers must use suitable fall protection.

A safe access solution involved a variety of methods – including the installation of a cantilevered walkway.  Due to lack of space, a cherry-picker could not be used to access the roof for installation purposes, so the walkway had to be installed by an abseil access team using rope access.

Safety Fabrications provided our Ascent™ Walkway in mild steel (the Ascent™ Walkway is also available in aluminium).  The modular walkway system is designed to be self-supporting and is formed from a framework which enables it to achieve unsupported spans of up to 5.6 metres with a handrail load of 0.76KN.  Safety Fabrications’ walkway systems are ideal for specialist applications such as this.

Designed with flexibility in mind, the walkway can be used for maintenance access or as a fire escape walkway.  The walkway can be supplied with adjustable rubber spreader feet or it can be suspended or supported on cantilevered brackets to create a suspended walkway system.  The walkway is supplied in component parts, making it easier to install on site, a vital issue in the case of Alder Hey where roof access was already presenting a challenge due to the building’s unique design.