The Amazing History of Lunch atop a Skyscraper

The Amazing History of Lunch atop a Skyscraper

One of the most famous photos ever taken is also one of the most vertigo-inducing. Lunch atop a Skyscraper is an incredible image of a group of workers eating and smoking while sitting precariously on a giant girder high in the sky. 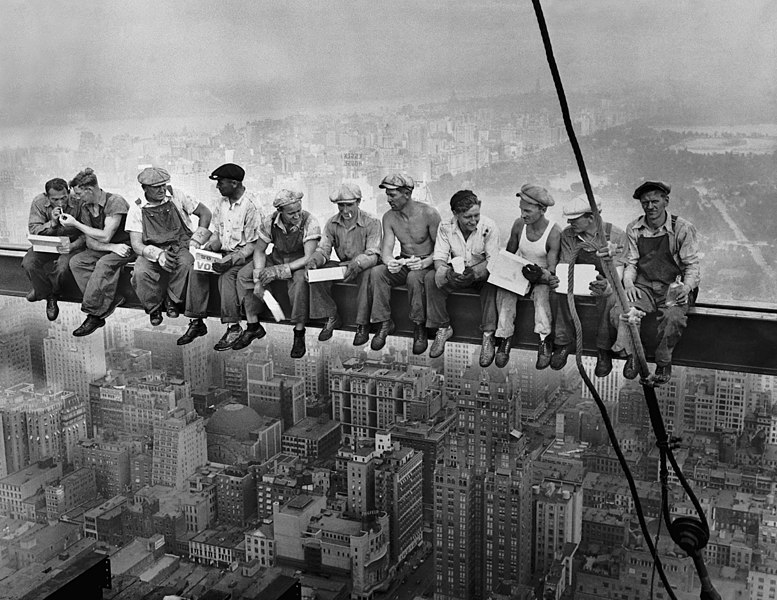 Figure 1 - Lunch atop a skyscraper

Most people have probably seen this image at some point, and probably let out a gasp when they saw it for the first time. Yet, it is possible that many of them thought that it was a fake image. So, what is the true story behind this amazing photo?

Where and When Was It Taken?

These men were high up on the Rockefeller Center in Manhattan, New York during its construction. It is commonly assumed that they were building the Empire State Building but that building was already completed when the image was taken.

The eleven workers are at a height of some 840 feet (260 metres) above the ground. They were on what would be become the 69th floor of this building. In fact, it is thought that the floor was already completed and they were sitting just a few feet away from it when the photo was taken.

The most remarkable thing is the fact that they all look so relaxed and natural in such a precarious setting. There are no harnesses, safety ladders or other essential construction equipment anywhere to be seen.

The image was taken on the 20th of September in 1932, as the building’s construction entered its final few months. It first appeared in the New York Herald Tribune at the start of October.

Is the Photo Real or Fake?

All of the evidence points to this being a real image, with no tricks involved in it. That is to say that they are real ironworkers who were genuinely sitting on an iron girder high up in the sky.

However, that doesn’t mean that it was a spontaneous moment that happened to be captured by a lucky photographer. Instead, it was a staged photo that was organised by an advertising agency and was designed to promote the new skyscraper.

In fact, this was just one of a series of images taken that day. Others show the men throwing a football or acting as though they were fast asleep on top of the beam.

Who Was Involved in It?

The name of the photographer who took this iconic image has been the source of debate over the years. It is now credited to Charles C. Ebbets after evidence of his involvement was verified at the start of this century.

It is claimed that three of the men are Native Americans and others are believed to be Irish and Swedish. Among them, it has been suggested that there a pair of brothers from Galway called O Cualain.

A documentary called Men at Lunch helped to clear up some of the mysteries around this photo, although it also helped to create a few more at the same time.

This image is sure to continue to draw gaps for years to come. Apart from the sheer impact of seeing the workers’ care-free attitude at such a height, it immediately takes us back to a lost age, when construction site safety was seemingly fairly low on the list of priorities.